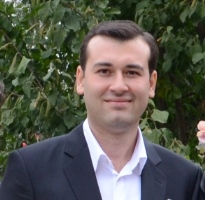 Eduard Abrahamyan is a regional security and defense strategy expert focused on Greater Black Sea affairs. He graduated from the Yerevan State University, Department of International Relations and Politics (where he subsequently also completed his PhD) and subsequently from the University of Westminster, London. Eduard is one of the founders of analytic center “Mitq” and has conducted research in Armenia, United Kingdom, Belgium, Russia, US on various issues, such as, political and military threats and risks in the Eastern Europe and the Black sea, the prospects of political and military partnership between South Caucasus states and NATO, among others. Currently, Eduard lives in London, where he is broadening his expertise in international relations and regional security of the Balkans, South Caucasus and Eastern Europe at the University of Leicester.