Roundtable on Karabakh at the Carnegie Endowment 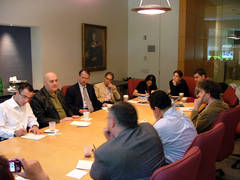 On April 30, 2010, Policy Forum Armenia held a roundtable discussion on Karabakh hosted by the Carnegie Endowment for International Peace in Washington, DC.  The speakers were Igor Muradyan, an independent analyst and one of the main initiators of independence movement in Karabakh in 1980s—who is visiting Washington at the invitation of PFA—and Thomas de Waal, Senior Associate in the Russia and Eurasia Program at the Carnegie Endowment.

Moderator Dr. David Grigorian thanked the Carnegie Endowment for hosting the discussion, the panelists for agreeing to share their views, and the attendees for joining.  The following is the summary of the points made by speakers:

A lively discussion followed after the presentations that touched upon the costs and benefits of any concessions on the Armenian side; the ability of official Yerevan to handle complex negotiations on multiple fronts; the economic and developmental dimension of the conflict; as well as incentives (or lack thereof) of world powers in achieving normalization in the region.

The roundtable ended on a note that no political solution of conflicts in the modern history has ever changed the prevailing military outcome.