Round-table Discussion on “The 4-day War between Armenia and Azerbaijan: Russia’s Role and Implications for the Wider Region” 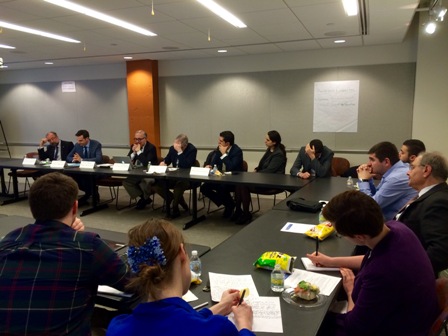 Washington, DC.—On April 21, 2016, Policy Forum Armenia held a round-table discussion on the "4-day war" between Armenia and Azerbaijan that brought together experts from Modus Vivendi center (Yerevan), National Defense University, Brookings Institution, Johns Hopkins University (SAIS), American University (SIS), and Carnegie Foundation (all Washington), as well as members of Washington Armenian community. What follows is a summary of the discussions that took place during the seminar.

The events of the” 4-day war” debunked two critical myths in Armenia:

Myth #1: The regime is capable of preserving the status quo in Artsakh (Armenian name of Nagorno-Karabakh) by maintaining a viable army. We know now this is not true: systemic corruption and incompetence were in many ways behind the failures of intelligence, adequate supply of arms, and diplomacy.

Myth # 2: Russia is an effective partner and can at least guarantee the peace in the region. This too proved wrong. Moreover, concern now is that Russia is preparing a defeatist peace for Armenia, involving deployment of peacekeepers in the region and forcing Armenia to give away some territories.

It is only due to the effort of the troops on the line of contact that the situation was saved. As a result, the view commonly shared within the society is that the regime needs to go as it cannot perform its key functions anymore.

This war is not a minor issue and it can draw in other regional power.

A view from the West

A view from Georgia

A view from Turkey