PFA Hosted a Discussion on the Conditions of Armenians in Syria 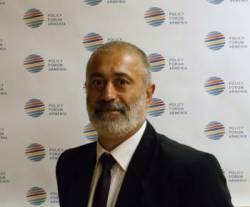 On August 29, 2013, Policy Forum Armenia held a discussion on conditions of Armenians in Syria. The featured speaker was Arménag Aprahamian, the President of Paris-based National Council of Armenians from Western Armenia, an organization accredited by the United Nations to represent one of the indigenous people of Western Armenia. Mr. Aprahamian started his address by providing an overview of the vision and operations of the National Council and putting these in context of the wider fight for the Armenian cause. While discussing conditions of Armenians of Syria, he impressed upon the participants the gravity of the situation, especially of those communities that are close to the lines of infighting between government and rebel forces. He singled out the inability of the world-wide Armenian Diaspora to join forces as the main reason behind continued challenges faced by Armenians in Syria.

Mr. Aprahamian discussed the potential for political and diplomatic solutions to the security threat faced by many Armenian communities in Syria and emphasized that more innovative thinking and hard work would be required to provide the necessary protection for Armenians in Syria. He stressed that—due to differences in conditions facing different Armenian communities across that country—communities themselves should decide which response to choose (ranging from relocating abroad, including to Armenia, to organizing their own defense) and called upon the members of the Washington community to stay tuned and be ready to assist. A lively question-and-answer session followed.

Born in France, Arménag Aprahamian first visited Armenia following the 1988 Earthquake in Spitak to assist children traumatized by the quake via exposure to physical education and martial arts. Since 1991, he fought in the Artsakh war initially along side of Leonid Azgaldyan, whom he helped found the Liberation Army becoming its chief instructor. He participated in all major military operations in Shushi, Mardakert, and Kelbadjar. Between 1999 and 2003, Mr. Aprahamian was active with the Organization of Veterans of Artsakh war and was its representative in France. On December 17, 2004, he formed the National Council of Armenians from Western Armenia. In that capacity, he also oversaw the formation of the executive body of Western Armenia—a government in exile—in March 2011. Since the beginning of the civil war in Syria, the issue of security of Armenians there was in the center of his attention. He visited the country on several occasions during 2012-13 to help the local Armenian communities organize and care for their own economic and security needs.Pictures from the event are available in our Media Gallery.