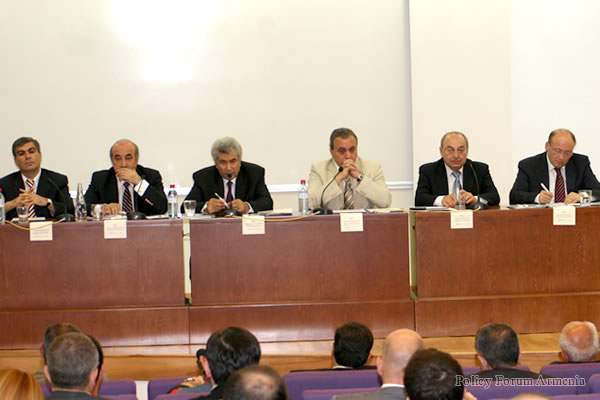 A high-level economic forum held in Armenian capital Yerevan on Monday brought together former and current economy policy makers to discuss the implications of the continuing global economic crisis for Armenia and help devise policy prescriptions to mitigate them.

“Armenia: Weathering the Global Storm”, an event held by independent think tank Policy Forum Armenia, was attended by representatives of international organizations, major policymakers from regional economic powerhouses, and an unprecedented line-up of Armenia’s key economic policymakers since independence.With the deepening effects of the global financial and economic crisis already fully felt in Armenia, the country’s government is seeking new ways to stop and reverse the continuing economic decline. But some analysts say government action is belated, and others believe the measures being taken are still insufficient. These and other evaluations were heard at the forum in Yerevan held for the purpose of outlining actions to alleviate the negative impact of the crisis. In his opening remarks, Abel Aghanbegian, an academician from the Russian Federation, predicted that the crisis would last for another three or 3 ½ years and stressed that it was important to come out of this crisis with increased strength.“The crisis holds out a number of opportunities, such as a decreased inflation, ‘cheap money’, opportunities for developing small and medium-sized enterprises. When imports fall in conditions of the crisis, a country like Armenia should diversify its exports, since in conditions of the depreciating national currency, favorable conditions are created for producers,” the academician said.Meanwhile, former chairman of the Central Bank Bagrat Asatryan sees an opportunity for a slow increase in exports only in 2010-2011, whereas in 2009, according to the economist, exports will be falling in parallel to imports.“Moreover, a decline in cash remittances and losses of jobs that have started in Russia this spring and are likely to continue for the next few years will lead to an 11 percent economic decline [in Armenia] in 2009,” said Asatryan, explaining that indices posted by the Central Bank have been used for the purpose of making this forecast.Asatryan, as well as many other participants in the forum, stressed in their speeches that system changes were required for meeting the challenges of the current crisis. Former first deputy chairman of the Russian Central Bank Sergey Aleksashenko, presenting the current situation in Russia, underlined the importance of institutional reforms, including for Armenia.“It is incumbent on the government to fight corruption and monopolistic practices, so that small and medium-sized businesses can develop [even] in conditions of the crisis,” said Aleksashenko. David Grigorian, the co-founder of Policy Forum Armenia and an economist at the International Monetary Fund (IMF) in Washington, told ArmeniaNow that the purpose of the event was to combine together Armenian and outside experience. “The purpose of this forum is to bring together the expertise not only that has been accumulated in Armenia since independence in terms of economic policy making, but also distinguished guests from outside that have very relevant experience in terms of crisis management. From that point of view we have achieved something already. It remains to be seen whether any of the findings or deliberations of the forum will reach its intended audience, of which the government is a part,” Grigorian said.“It is difficult to say whether or not the government is tuned to this and will be listening to this. But we certainly hope so… However, it is an unprecedented occasion to have current and former economic policy makers together discussing issues of importance.”