Geopolitical Implications of Pro-Democracy Movement in Armenia: What’s at Stake for the US? 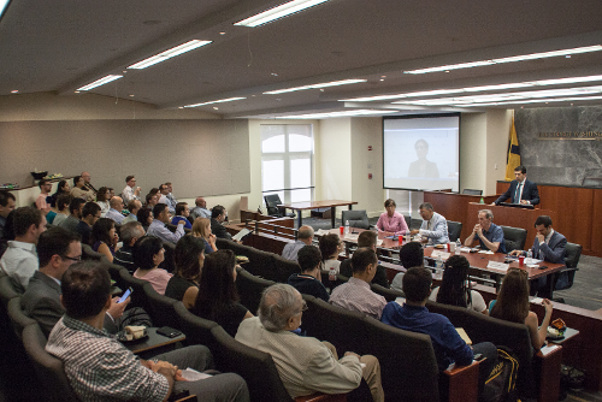 Washington, DC.—On September 6, 2016, Policy Forum Armenia held a discussion on "Geopolitical Implications of Pro-Democracy Movement in Armenia: What's at Stake for the US?" at the George Washington University's School of Law that brought together prominent experts and participants from think tanks, government agencies, non-profit organizations, and the Armenian community of greater Washington area. Below is a summary of the discussion that transpired.

Summary of the Discussion

Armenia is caught in a perfect storm of domestic and foreign policy crises that have been in the making for well over a decade. For years, the national security threats over the physical survival of Nagorno-Karabakh (NK) have forced ordinary Armenians to tolerate corruption and mismanagement of successive governments in the name of security and stability. However, this has come at a cost of entrenchment of a deep oligarchic system (incorporating the members of political elite unchanged since independence in 1991) and has turned Armenia into perhaps the most disappointing case of the former Soviet Union (despite the promising start).

The current oligarchic system, ubiquitous corruption, and the resulting economic hardship have led to mass exodus (nearly half of the population emigrated since 1991) and undermines the very national security of Armenia. After two contested presidential elections, in December 2015 Serge Sargysan presided over a referendum to transform Armenia from a presidential into a parliamentary republic, potentially allowing him to rule the country as a prime minister indefinitely. In sum, Armenia is moving along an unenviable path of steady erosion of democratic and economic freedoms.

Public protest against Sargysan’s rule took a dramatic turn in July during the events in Yerevan. These were notable not only for their apparently broad public support, but also their anti-Russian tone (see below). It is possible that widespread political instability in Armenia and the South Caucasus could develop into a stronger protest movement as the population is dissatisfied with a lack of economic progress, corruption, and shrinking liberties. In turn, this may lead to further crackdowns by the government and instability.

Initially, it may have been the Turkish threat that has pushed Armenia into the arms of Russia following Armenia’s independence in 1991. However, the political elite has abused this card over the years, using it to manipulate the public opinion. This has gradually led to Russia gaining control over Armenia and keeping it politically weak, internally divided and economically dependent. This has provided a perfect cover for the Armenian ruling elite to move toward more autocratic rule at home.

Following the U-turn on its EU integration plans in September 2013 and rapid accession into the Russia-led Eurasian Union, Armenia has locked itself in an asymmetric relationship with Russia, allowing Moscow to dictate the terms of everything of consequence.

It looks increasingly obvious that Russia is aiming to exert political control in the region as it did during the Tsarist Empire and the Soviet Union. Doing so involves undermining Armenia’s economic self-sufficiency, creating military insecurity, and keeping political control in the hands of strongmen, who are either beholden to Putin or sympathetic to his broader agenda.

Russia is taking advantage of the virtual absence of the US and EU in the South Caucasus to tighten its grip on Armenia and Azerbaijan and encircling Georgia, which has been making significant progress with its EU and NATO integration in recent years.

The grooming of an oligarchy and tolerating Russia’s overly assertive policies towards Armenia for the sake of security and economic wellbeing may have backfired. Armenia is suffering from very high rates of poverty, while the threat of a new large-scale war is the highest since 1994 when the ceasefire was signed.

Russia has maintained a large military base in Armenia and its formal role is increasing. In June, the Armenian parliament ratified an agreement to create a joint Russian-Armenian air defense system, thus allowing Russia to take the control over Armenia’s air defense. Furthermore, its arms trading has been instrumental in undermining the military balance of power between Armenia and Azerbaijan since 2013 in favor of Azerbaijan. This may have emboldened Azerbaijan to stage a large scale attack and the “4-day” war in April 2016, claiming hundreds of lives on both sides.

Events taking place in Armenia and the NK today should be viewed in conjunction with Syrian and Eastern Ukrainian conflicts, as parts of Russia’s geopolitical agenda to use conflicts as levers on the West. Russia is keen to have a lead role in the NK conflict resolution process, except it is not seeking a conflict resolution but management to expand its influence and eventually the Russian-led Eurasia Union in the South Caucasus. Russia’s interests in NK mean perpetuating the conflict or resolving it in a manner that will leave Armenia without defensible borders and, therefore, more dependent on Russia.

Since April, Russia has been involved in a shuttle diplomacy, to advance its own version of the conflict management—previously known as “Madrid Principles.” which Russia succeeded in modifying into “Kazan Principles”—whereby the Armenian side will transfer control of five regions to Azerbaijan in return for a temporary status for the NK. This is an attractive solution for Azerbaijan, which has tried and thus far failed to regain NK with military means.

In addition, Russia has made it clear that Azerbaijan needs to agree to the deployment of Russian peacekeepers in NK, which will tighten Moscow’s control over Armenia as well as Azerbaijan. If the Armenian side fails to comply with the plan, Azerbaijan would be less constrained by Russia to launch another military campaign to change the status quo in NK.

For the first time since Armenia’s independence there is a strong drive among ordinary Armenians to revisit the country’s geopolitical orientation. The April war became a watershed moment for ordinary Armenians, prompting them to reassess their long-held views on partnership with Russia and the oligarchy. Russia’s heavy-handed policy towards Armenia and neglect of its developmental and security needs led to an unprecedented anti–Russian sentiment and triggered a debate on possible Euro-Atlantic integration.

First, the South Caucasus are a long way from the United States, both in terms of geography and the focus of American policymakers. This is a reality, at least with the current US administration and its stated priorities in Asia and the Middle East. However, this is an oversight and more attention should be given to the region for two reasons:

In addition to the realist reasons, there is a more idealistic reason. Democratic reform in countries like Armenia is a good thing for the United States, while a path towards soft dictatorship, totalitarianism, and economic and diplomatic dependence on Putin’s Russia is not. The US should support free and fair elections and free markets, reject the referendums that support one-party or one-man rule, and help fight systemic corruption and oligarchy. Apart from the reasons that it shares these values, the US should pursue these objectives (in Armenia and the region) because democratic nations are less likely to fall under the control of Putin’s Russia.

Since the collapse of the Soviet Union, the US invested significant development funds in Armenia, in per capita terms exceeding the funding made available to Ukraine. However, Armenia chose a different path largely due to a greater degree of dependence on Russia. Ironically, at present, the State Department may be comfortable with the status quo of Russian–Armenian relationship as it becomes one less issue for the administration to worry about. However, if the pro-democracy movement in Armenia gets stronger, it will have chances of changing the geopolitical landscape of the region and get the attention it deserves.

Armenia and the region are in a vulnerable position. Therefore, better policies by the West should be put in place so that an explosive regional crisis can be averted. Russia is unlikely to change its expansionist policy in the region any time soon, suggesting that the people of Armenia are facing an uphill battle in their fight for a better system of governance.

The systemic corruption is undermining Armenia’s path toward self-sustainability. However, good governance—the only factor that drives economic progress across the world—could come only from a democratic society.

The United States should engage more actively in the region to support democratic forces in Armenia and to hold the current government to account more energetically. The half-hearted condemnations of the practices of the Sargsyan regime, or worse, of silence, in the face of its failures is no longer sufficient.

An internationally secured and mutually acceptable compromise on NK may break Armenia free of Russia’s stranglehold. However, as claims of beheadings, mutilation of elderly and mortar attacks on school children by Azerbaijan’s armed forces during the April war emerge, the enforcement of unilateral concessions (in return for an intangible status for the region or some vague security guarantees for the Armenian population) is unrealistic at best.

Finally, a possible normalization of relations with Turkey may offer another channel for reducing reliance on Russia. In principle, by addressing the problems with Turkey, Armenia can decrease its dependence on Russia, since the threat from Turkey keeps Armenia under Russia's influence and "protection". Earlier attempts by Turkey to improve its relations with Armenia were torpedoed by Azerbaijan, which threatened to undermine Turkish-Azeri relations, which Turkey was not ready for. However, the recent domestic developments in Turkey and its rapprochement with Russia will likely undermine the prospects of Turkish-Armenia reconciliation and will not change the current status quo. It is in the US interests to continue to encourage Turkey to find a way forward with Armenia even at the expense of its relationship with Azerbaijan.

Pictures from the event are available in our Photo Gallery. Voice of America's coverage of the event can be viewed here.