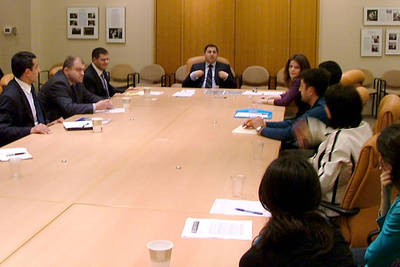 On April 3, 2009, Policy Forum Armenia, in collaboration with the National Endowment for Democracy (NED), hosted a roundtable with Armenia’s Human Rights Defender, Armen Harutyunyan. Mr Harutyunyan was in Washington on the International Visitor and Leadership Program under the State Department's Bureau of Educational and Cultural Affairs. The event took place at the NED Headquarters in Washington, DC. Following is a summary of the session, a video report of which is available on PFA’s YouTube channel.

In his introductory remarks, PFA founding Senior Fellow Armen Kharazian noted that the Ombudsman has one of the most challenging jobs in Armenia. He deals with human rights, an area where Armenia’s record has deteriorated over the past year. Under difficult circumstances, the Office of the Ombudsman has carried out its mission with noticeable courage and skill, emerging as an engaged and relevant participant in Armenia's constitutional process. The Ombudsman’s role has made him a target of criticism by both the authorities and the opposition, but he has also earned an acknowledgment—both at home and internationally—for demonstrating a streak of independence and integrity on the job that has helped advance the cause of democracy in Armenia. PFA supports this role, and is pleased to welcome the Ombudsman as a guest speaker.

Mr. Harutyunyan opened his presentation with an overview of the human rights situation and recent political developments in Armenia. Speaking on human rights, he noted that unfortunately Armenia in not a democratic country. Human rights remain a difficult area, requiring much improvement. Judiciary is dependent on the executive branch, and law enforcement is seriously flawed: their actions and willingness to please the political leadership at times go beyond intentions of the political leadership itself. A good example of the judiciary acting as a robber stamp for the authorities is the legal cases involving nationalization of private property by the state. Mr. Harutyunyan noted that within the past seven years no citizen of Armenia has won any legal case against the state in these legal proceedings. “Whichever of these cases went to Strasbourg ended up getting a winning verdict,” said Mr. Harutyunyan, implying that the due process in Armenia is flawed. Commenting on the most recent trends, however, he was reasonably encouraged by the reports of the break-up of “the case of 7” into separate cases, which could expedite the process of the defendants’ eventual release.

Commenting on the political developments, Mr. Harutyunyan noted that the most serious problem in Armenia today is the deepening apathy within the society toward political processes taking place in the country. The atmosphere of intolerance toward the other side—the responsibility for which lies mainly with the authorities—is not helping in this regard. Ombudsman too often becomes a subject to this intolerance, getting criticized by both the authorities and the opposition for not following their respective lines without realizing that the role of the Ombudsman is not to be in opposition but rather to be an opponent. Mr. Harutyunyan noted that political polarization observed in Armenia today poses a grave danger for Armenia’s national security. Checks and balances, which are so important for the functioning of modern democracies, are absent in Armenia, leading to the establishment of a de facto heavily unipolar system. In addition, he noted that political parties do not perform the function of intermediaries between people and the authorities. Their rhetoric does not always match with their actions and stated objectives.

Turning to issues from the domain of economic and social development, Mr. Harutyunyan stated that economic development cannot take place in an environment of extreme monopolization. One of the implications of Armenia’s heavily controlled, oligarchic economic system is that people enter business sphere (and often given controlling positions there) not because of their entrepreneurial skills but instead for their connections and willingness/ability to serve the ruling elite. The use of resources is not done via market mechanisms, but instead in a way that suits a few who control their flows.

The question-and-answer session that followed the main presentation touched upon several issues, such as, Ombudsman’s personal safety and the recent controversy over the assignment of state-funded bodyguards; Ombudsman’s position on the term “political prisoners;” the difference between the interest of the state and that of the government; success rate of addressing grievances by Ombudsman’s office; measures that could help the society to move forward from the current stand-still, among other issues.